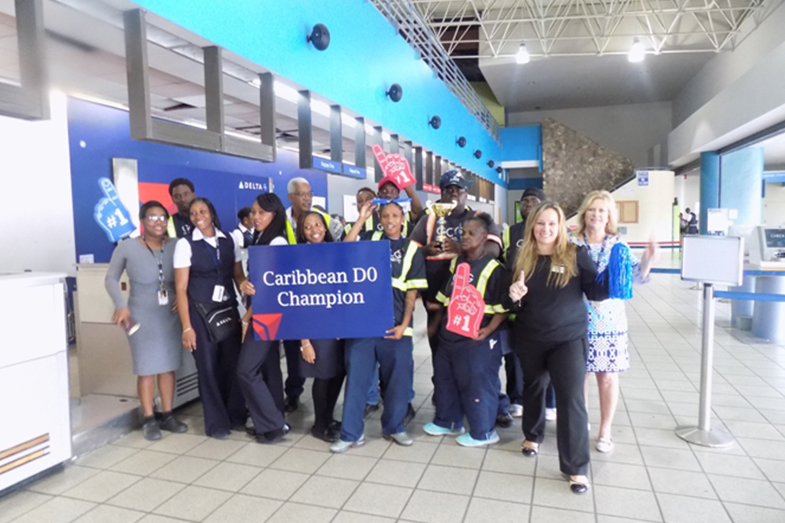 GCG Ground St. Thomas was listed as #1 in the Caribbean for on-time departure rate (D0) and ranked in the top 10 internationally. Management and staff gathered at the Delta Counter at 4 p.m. on Tuesday, February 6, 2018, to celebrate the company’s successful 100 percent on-time departure rate for Delta Airlines in the month of January 2018. The on-time departure team was rewarded with a trophy and accolades from Delta.

The team also celebrated successfully achieving a Perfect 5 for Zero Aircraft Damages and Zero Security Violations. Even after two Category 5 hurricanes, the crew safely operated two humanitarian flights and earned a ranking of #4 Station of the Year, as well as a ranking in the top 10 10 International KPI League.

The Event was coordinated by the event committee, which is comprised of team members from GCG Catering, the GCG Ground, and the Delly Deck restaurant. The team liaised with General Manager Jahmal Dyer and Sous Chef Antonio Anthony to provide a plethora of finger foods, salads, and desserts to commemorate the success. Jose Bultes, the Event Committee’s Management Representative, lent his baking skills to provide a spectacular gelatin cake complete with edible flowers and a traditional sheet cake completely decorated with the GCG Group logo and the image of a Delta Aircraft.

The event was well attended by GCG staff, customs officers, the port authority, and Airport Manager Mitchell Todman and Airport Operations Supervisor Ms. Murtle Thomas. Delta’s station Manager Debra Ceronsky shared a few words of pride and encouragement to the team before the event committee members made a toast to the continued success of the year.

GCG Ground St. Thomas continues to strive for the success in the year ahead and is making every effort to continuing on 100% on-time departure in the operation.